HOW DO PLANETS LIKE THE SUN AND MOON IMPACT HUMAN EYESIGHT?

All the organs of the human body are valuable, but the eyes have their unique importance.  Without eyes, human life becomes meaningless.A blind man always feels helpless and needs someone to guide him. It is generally said that if the Sun is the light, then the Moon is its reflection. 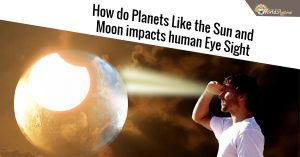 Astrologically to have clear vision and eyes without any defect, both the Sun and Moon must be unaffected in a horoscope.  They should not be weak or aspected by malefic like Saturn, Mars, etc.  They should not be posted in Dustanas, the 6th, 8th, or 12th house. The experience has shown that the 2nd and the 12th are the houses of sight.  The 2nd house stands for the right eye, while the 12th for the left eye.  It is further observed that if the Sun governs the right eye, then the moon rules the left.  If the 2nd and 12th houses are aspected by them, one suffers from eye disease.

Saturn and Mars aspects the Sun and Moon in the ascendant Leo bring forth a blind child.  However, if the same ascendant is aspected by benefics also, then clear sight is the outcome. The moon on the 12th injures the left eye.  But strong benefits aspecting will save the eye from being injured. Saturn and Mars aspecting the moon in Leo alone produce blindness in the left eye.  If these malefic aspects the Sun and the Moon, the child will not be born blind but may suffer blindness later.

HOW TO MINIMIZE EYE DEFECTS ASTROLOGICALLY?

However, eye defects get minimized if the moon is exalted or conflicts with a benefic planet.

THIS IS HOW PLANETS SUN AND MOON IS A HOROSCOPE THAT CAUSES THEIR IMPACT IN ONE’S EYES.

A SHORT TALE : DESTINY WITHOUT WORK IS NOT ENOUGH