Health is problematic to one and all.  Generally, the Astrologers try to judge and predict disease in one’s horoscope from the ascendant.  But our experiences have also shown that it can also be correctly done from the first sign of the natural zodiac that is Aries.

It is also found that the disease caused through 8th house is most of serious nature.

The disease is a retribution of our past misdeeds alone done in our previous birth.  For cure, virtuous deeds coupled with the use of requisite gemstone, etc. may work the best.

Before predicting a particular disease and its possible astrological treatment, one is to delve into the root cause of the disease first.  For example, an afflicted Mars (Kufa Dosha) under certain circumstances gives female disease.  It requires the specific use of gemstone to be preserved only after closely judging the placement and strength of planets. 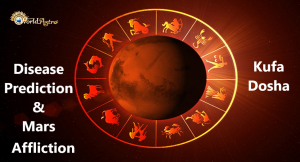 In regard to Mars affliction (Kufa Dosha), gemstone should be as per the location in the chart available texts do not seem to contain any chapter on this “Kufa Dosha ”.

Like Kalsarpa yoga, Kufa Dosha is the subsequent addition in modern times. Reference of Kufa Dosha is not seen in the kind and gentle tones of the masters.  It seems that perhaps somewhere some Pandits have inserted this.

The unfortunate result suggested by this assertion has become so widespread that parents of boys and girls get utterly frightened to hear its presence in the children’s chart.

To remove the fear of the parents it is hereby clarified that for Kufa Dosha, the Bhava Kundli should be judged and not the natal chart.  Generally, astrologers look into the natal chart to find Kufa Dosha.  It is not the correct approach.

If the Bhava Kundali shows no affliction then it can be boldly declared the absence of Kufa Dosha.  When Mars is powerfully placed this affliction is low in comparison with his placement in his house of fall or in enemies quarter.

It is further to be noted that prior to this the strength of the Lords of the 2nd house, the 7th house, the 8th house both from Moon and the ascendant be scrutinized and so also of Venus itself.

For example, if for Capricorn ascendant Mars be in the Lagan where he is exalted, the affliction due to his 7th aspect is nil.  However, if the process is reversed, if Mars in its house of fall happened to be in the ascendant, his 7th aspect will be a very strong affliction.

It follows that planets in their exaltation, Mool trikon, own house should be carefully taken into consideration in judging “Kufa Dosha”.

HOW DO PLANETS LIKE THE SUN AND MOON IMPACT HUMAN EYESIGHT?